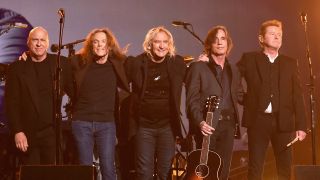 The Eagles and Jackson Browne at this year's Grammys ceremony (Image credit: Getty)

The Eagles, Mavis Staples and James Taylor will be honoured by the John F Kennedy Center For Perfoming Arts this year.

They’ll be honoured at a gala event on December 4 in recognition of their contribution to American culture through the arts.

Actor Al Pacino and pianist Martha Argerich have also been named as recipients.

The Eagles were to take part last year, but changed their plans as a result of Glenn Frey’s poor health. He died weeks after the 2015 event took place.

“We have a great opportunity to recognise people who are still active, and have accomplished so much.”

Don Henley said in March that the Eagles were over, and that their tribute set to Frey at this year’s Grammys – featuring Jackson Browne – had been their final appearance. Staples won this year’s Best American Roots Performance Grammy.