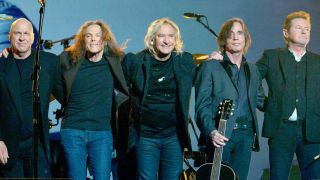 The Eagles’ tribute to late member Glenn Grey at this year’s Grammys ceremony was their last-ever show, drummer Don Henley has reported.

The band performed classic track Take It Easy, with guest performer Jackson Browne, in an personal farewell to Frey, who died in January.

Henley tells the BBC: “It was very difficult. We actually almost didn’t do it – but the Grammy people were very insistent, so we decided that we would.”

He adds: “I think that was the final farewell. I don’t think you’ll see us performing again. That was probably it.”

He describes Frey’s death as “a great loss,” continuing: “We’re still trying to cope with it.

“Jackson was the appropriate person to sing the song, because, as most people know, Jackson started the song and Glenn helped him finish it.

“I thought it went pretty well – we were very emotional, but we did it.”