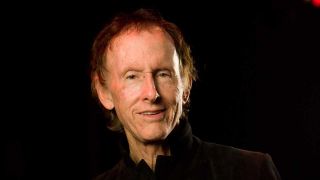 Doors guitarist Robby Krieger has announced his first solo album in a decade. The Ritual Begins At Sundown will be released on The Players Club, a division of the Mascot Label Group, on April 24.

The Ritual Begins At Sundown was written with Frank  Zappa’s old bandleader and bassist Arthur Barrow, and reflects Krieger's longtime love of jazz.

"When I wrote songs for The Doors, it was always the music first," says Krieger. "I think you have to have some musical ability to really understand Jazz, when I was young I didn’t really understand it, it took me a while.

"I was going to the clubs with John Densmore - before The Doors - to really get an appreciation of Jazz. We used to go see Wes Montgomery, Roland Kirk, Miles Davis, stuff like that. At first I didn’t really get it, but after a while it sank in and I always loved it after that."

Krieger has also released the first song from the album, The Drift.

"After The Doors I started becoming interested in Jazz and started hanging out with a guy called Sal Marquez,” says Krieger. “So we put this band together and that was the first Robby Krieger band and we played at the Whiskey A-Go-Go with Don Preston, Zappa’s keyboard player.

"Arthur Barrow, who was a huge Zappa fan -  this was before he worked with Frank - he decided that, after graduating from North Texas State music school that he was gonna come out to LA and try to get into Frank’s band, which was pretty brash of him.

“He started hanging out with Don and with Zappa, Don was in my band so we decided to put Arthur in charge of the mixing at the Whiskey for our shows, that’s when I first met him in the 70s."

The Ritual Begins At Sundown is released on April 24.

The Ritual Begins At Sundown tracklist