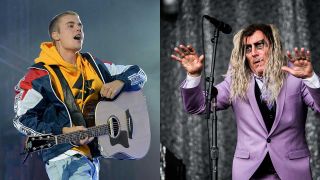 As far as popular music beefs go, James Maynard Keenan versus Justin Bieber might not be the most spectacular, but it's certainly generated the best mashup.

"You must be unhappy with yourself that you want to make people feel small who express their admiration for you," she wrote. “Very childish and hurtful thing to do. I hope you find security within yourself. Sad place to be.”

Now, reigning mashup supremo DJ Cummerbund has stepped in to referee the bout, creating a mashup that manages to wrangle Tool's Parabola and Bieber's Love Yourself into something new and magnificent, yet also deviant and sacrilegious.

You may be startled at how similar both vocalists sound once brought together in this unlikely fashion, but relief is at hand in the form of rapper Ludacris, who pops up to spin a few lines from his 2001 hit Area Codes.

Top work, Mr Cummerbund! As always, we salute you!