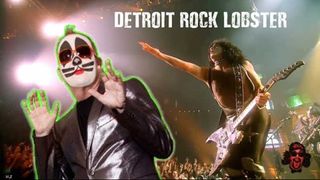 Our old friend DJ Cummerbund continues to carve his twisted path through the world of the mash-up, taking two diametrically apposed songs and melding them together in unlikely yet enticing fashion.

Cummerbund has also released a video as the final ingredient in this implausible recipe. According to the DJ, the clip features, "rare footage from back in '97 featuring supergroup The B-KISSty2's performing their hit song about a spunky crustacean from Motor City struggling with mental health issues."

Long may this kind of nonsense continue.