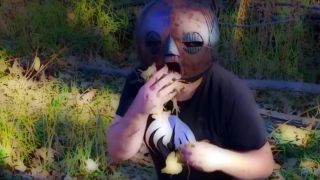 When The Evolution Control Committee released their classic mashups of Public Enemy and Herb Albert’s Tijuana Brass back in 1994, it’s likely that no one believed such unlikely pairings would still be making noise more than two decades later. Yet cheap editing software has lowered the bar to participation, and the internet provides a platform where anyone can reach a large audience far more quickly than before. In 2017, mashups are bigger than ever.

One of the more mysterious operators in the current scene is DJ Cummerbund, whose previous work includes an aural jigsaw comprised of Rush’s YYZ and Kelis’s 2003 R&B smash Milkshake, and a funky mess of Foo Fighters, Rick James, and Led Zeppelin.

Now he’s released a mashup that welds Twisted Sister’s classic hair metal anthem We’re Not Gonna Take It to Blind Melon’s 1993 MTV monster No Rain. Listen closely and you’ll also hear lifts from Jane’s Addiction, Rage Against The Machine, Faith No More and (probably) a host of others.

“This is a song about bees,” says Cummerbund, enigmatically.

Someone has created the ultimate AC/DC mashup