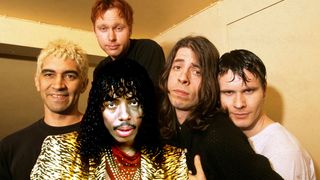 Eagle-eared readers will already be aware of the work of the mysterious DJ Cummerbund, the musical maverick who almost broke the internet last week with his mash-up of Rush’s classic YYZ with Kelis’s 2003 smash Milkshake.

This week he’s gone one better, seamlessly welding Foo Fighters’ The Pretender (the lead single from the band’s Echoes, Silence, Patience & Grace album) with Rick James’ funk monster Superfreak, with bits of Led Zeppelin’s Stairway to Heaven and The Beach Boys’ Help Me Rhonda thrust into the mix for good measure.

The Foos have already given the mash-up their seal of approval, and we expect the end result to be setting fire to dance floors the length and breadth of the nation before the week is out.