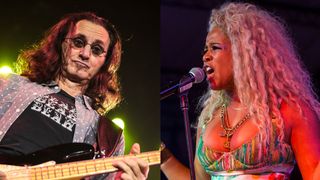 Just when you thought it was safe to go back on the Internet, a web prankster working under the name of DJ Cummerbund has gone and thrown a very large spanner in the works. Cummerbund has released a mash-up of Rush’s classic instrumental YYZ with R&B star Kelis’s 2003 chart smash Milkshake, seamlesslymatching the vocal from her 113 BPM original to Rush’s 140 BPM soundbed.

Cummerbund claims to have spent “over two hours” working on the project, and while it all starts a little shakily, by the time the chorus kicks in at the 45-second mark we’re frankly in awe of his ambition and technique. Further excitement on this giddy ride is provided by the inclusion of a sample from Macho Man Randy Savage & DJ Kool’s 2003 joint Hit The Floor.

Previous mash-ups by the mysterious Cummerbund include Smells Like Adele, which combines the singer’s Hello with Nirvana’s Smells Like Teen Spirit before throwing in dollops of Alice In Chains’ Rooster, Stone Temple Pilots’ Sex Type Thing, and yes, Macho Man Randy Savage into the mix. Savage also shows up on a bizarre Christmas collaboration between rapper DMX and Slipknot mainman Corey Taylor.

We have reached out to Geddy Lee for comment.

The Rush Quiz: how well do you know Moving Pictures?