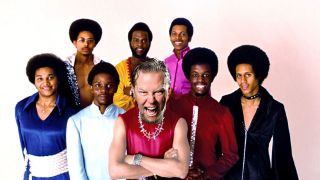 We can’t believe DJ Cummerbund doesn’t have more YouTube followers. There he is, painstakingly stitching audio and video together from Ozzy Osborne and Earth, Wind And Fire to make them sound like perfect musical partners, and he’s still only got a third of the followers of, say, the people who promote films celebrating the unique properties of Head & Shoulders Shampoo. Despite that Ozzy video being watched over three million times.

Throw his other mixes into the equation, and it becomes less of a puzzle and more of an outrage. Rush and Kelis. Foo Fighters and Rick James. Twisted Sister and Blind Melon. Disturbed And Smash Mouth. He’s done them all. And he’s done them all brilliantly.

The mash-up starts takes James Hetfield’s tormented vocal from Enter Sandman and adds them to the music from Earth Wind & Fire’s 1981 hit Let’s Groove Tonight. We’re particularly fond of the “Sleep with one eye open, gripping your pillow tight,” section, in which the nightmarish fear of the Metallica song is enhanced by a huge injection of funk.

So what’s next for DJ Cummerbund? He remains a mysterious, elusive fellow, but there is a clue in the comments section below the video for Let’s Groove Tonight, as one commenter asks if can do something with Sabbath. “I have something coming with Dio and Ricky Martin,” responds Cummerbund. “Is that ok?﻿

Yes, DJ Cummerbund. It certainly is.

The Best Led Zep Mash-Ups as chosen by JimmyPage.com