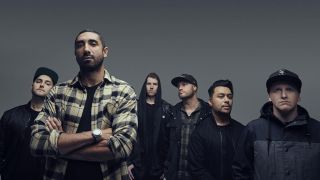 New Zealand prog rockers City Of Souls have released a new video for their brand new single Cruelty. The song is taken from the band's upcoming debut album Synaesthesia, which will be released through Wild Things on May 1. You can watch the video for Cruelty in full below.

"Cruelty was a demo I had been sitting on for a few years before I joined the band," vocalist Richie SImpson tells Prog. "It was complete structurally so it just needed a bit of a fine tune and it was in the bag. I'm really stoked the lads dug it and it made the record, I love playing it live. It has a real swing and swagger to it.

"Kinda makes me wanna dance like Snoop Dogg haha. I remember channelling some nine inch nails reptile into the seasick bending guitar layers over the intro riff... it gave this dark energy to it. I love the mood changes that layering can give an idea. Cruelty is about the damage a lack of empathy can cause."

The band have been working on their debut album for five years now.

"City of Souls have hit every single obstacle and block you can imagine," adds guitarist Marcus Powell. "For us, this album is about endurance, passion, and a deep love for music... To say we are excited to release this album is an understatement."