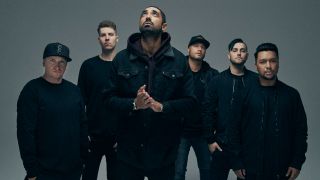 Wolf is taken from the band's forthcoming and as-yet untitled debut album recorded with producer Forrester Savell (COG, Karnivool, Dead Letter Circus). "We don’t want to ‘Be’ anything or adhere to a particular idea of what our sound should be," vocalist Richie Simpson tells Prog. "We simply want to create for the sake of creating and to leave something behind that I am proud of.

“We’re super excited to announce we’ve signed with Wild Thing Records internationally for the release of our debut album later this year. Eli Chamravi & the Wild Thing team are really well connected with the right kind of bands for us, laying down strong foundations for the future. We've also linked up with Artery Global for European bookings. Europe has been somewhere we've wanted to play for ages, so it's cool to have some serious big league framework in place now.”

The band will support UK prog metallers Monuments in New Zealand at the end of this month before heading to Australia to take part in this year's 10th Anniversary Progfest line-up.