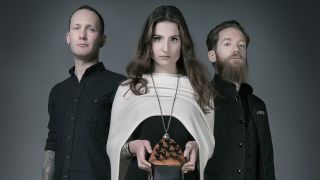 Swiss folk metallers Cellar Darling recently took a trip from London back to the mountains they call home. Since their split from Eluveitie, Merlin Sutter, Ivo Henzi, Anna Murphy have been forging their own musical path and released their debut album This Is The Sound last month on Nuclear Blast.

While in the same mountains and picturesque surroundings that the band came to to find inspiration, and the set of their first ever photoshoot, the band reminisce about the region’s importance to the group, and that it thankfully hasn’t become overrun with tourists yet.

Anna also reveals the story behind Avalanche, the chorus of which simply started as “la la la”, but morphed into the story of a suicide cult in the alps where, according to Anna, the cult would “yodel which makes the avalanche come down and kill people with snow so they die.”

Cellar Darling also discuss some of their biggest influences in the below Q&A videos, from The Verve and David Hasselhoff to Albert Hofmann – the Swiss scientist who first synthesised LSD and learned of its psychedelic effects.

Anna also reveals how and why she fell in love with the hurdy gurdy, and which songs are best to represent what Cellar Darling are all about.

Cellar Darling’s new album This Is The Sound is out now via Nuclear Blast.

Cellar Darling - This Is The Sound album review