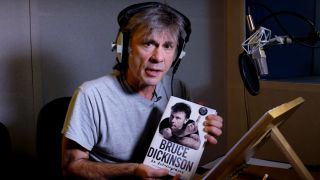 Bruce Dickinson in the recording studio

Bruce Dickinson has confirmed that an audio version of his book What Does This Button Do? will be released in conjunction with the printed publication.

The Iron Maiden frontman has narrated all 45 chapters from his book, which will arrive on October 19 via HarperCollins. And to mark the news, Dickinson has released a short announcement trailer.

He previously revealed an excerpt from the autobiography and gave details of a three-date UK book tour which will take place in London, Edinburgh and Manchester.

HarperCollins say: “In What Does This Button Do?, Bruce – a man who famously never gives interviews about his personal life – shares, for the first time, the most fascinating recollections, including his 30 years with Maiden, the early days, his childhood within the eccentric British school system, going solo, realising his dream of flying jumbo jets and his recent battle with tongue cancer.

“Dickinson is so much more than the frontman of one of the biggest bands on the planet. A rock icon, a true renaissance man, Bruce has been, and remains, a man of legend.

“Bold, honest, intelligent and very entertaining, What Does This Button Do? is the long-awaited window into the life, heart and mind of one of our most adventurous and multifaceted sons.”

What Does This Button Do? is available for pre-order, while Dickinson will launch a box set of his solo albums on October 27.