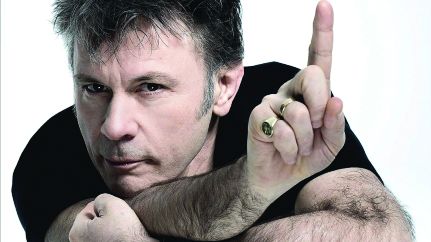 One way and another, Bruce Dickinson has pushed a lot of buttons: as a singer, airline pilot, fencer, broadcaster, author, screenwriter, songwriter, actor, you name it. He’s driven and determined when it comes to achieving the target he sets himself, whether it’s becoming an international rock star, getting a commercial pilot’s licence or curing his throat cancer. He’s also a very affable bloke with a wry sense of humour who can take the piss out of himself.

What Does This Button Do? is not so much an autobiography – although it begins like one – but a series of memoirs. Some of them are scenes from his life, such as his first terrifying pilot encounter with turbulence leaving him powerless as his plane is literally blown over the mountains, or his vivid tale of going to play a gig in Sarajevo at the height of the siege. His eye for detail enriches his writing, his attention to detail can be forensic, as the account of his battle with throat cancer reveals.

Iron Maiden fans should note that no dirt is dished here. There are no band politics once he has established his place on stage alongside Steve Harris and drummer Clive Burr has been manoeuvred out. There is, however, a brilliant description of his first meeting with manager Rob Smallwood and a scathing put-down of NWOBHM.

There’s no insight into his relationship with Harris, and even his growing dissatisfaction with the band’s direction is barely hinted at before he suddenly decides to quit after finding a quote from Henry Miller in the LA Times that reads, ‘All growth is a leap in the dark, a spontaneous unpremeditated act without the benefit of experience’. No mention of the unpleasantness on their final tour either. Indeed you’ll find out more about fencing and flying a plane than you will about life in a rock band, although he does admit that being a rock star ‘is not all it’s cracked up to be’.

Similarly there are no references to wives, children, the Osbornes or Nikki Sixx. Dickinson has set his own limits and he sticks to them. Some might argue that part of the picture is missing, but the clues that point to his future character traits during his time at public school – which he hated but refused to leave because he hated going home even more – fill in many of the gaps.