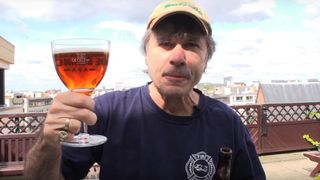 Dickinson with the new Hallowed beer

The Belgian-style beer was made by Robinsons Brewery, who the band worked with previously on their successful ale The Trooper.

In the 10-minute video, frontman Bruce Dickinson goes behind-the-scenes with Head Brewer Martyn Weeks and Technical Brewer Alistair Rushton and discovers more about the yeasts being used in Hallowed and tries various samples.

The video then moves to Belgium six months after his initial tasting during Iron Maiden’s tour in support of latest album The Book Of Souls, where Dickinson pours a glass of the new brew and describes its smell and flavour.

Dickinson previously said: “What makes this brew pretty special is that we’re adopting a Belgian yeast for the first time. I’m a big fan of Belgian beers, so I jumped at the chance to brew my own.

“While I get very excited about experimenting with new formulas and ingredients, the thing about Belgian beer is that it’s as much a way of life as it is a drink. We’ve tried to bottle that philosophy in Hallowed – albeit with a British twist.”

Hallowed is now available to purchase via the Robinsons Brewery website.

Dickinson will release his new book What Does This Button Do? on October 18 via HarperCollins. It’s now available for pre-order, with Dickinson previously revealing a three-date UK book tour taking in London, Edinburgh and Manchester.

Is there anything Bruce Dickinson can't do?