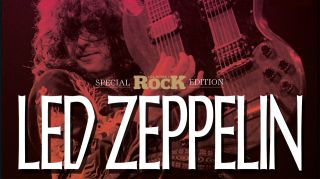 Are Led Zeppelin the greatest rock’n’roll band of all time? There are those who think so. And there are those who believe the four-piece who swept all before them in the 1970s, inventing Rock with a capital R and leaving a trail of half-believed legends in their wake, were little more than a group of fortunate plagiarists with fancy threads and decent hair.

Either way, Led Zeppelin were always larger than life: from their ground-breaking tours to the stories swirling around manager Peter Grant; from the stunning impact of their live-wire debut to the mid-career shifts that left critics bewildered; from extraordinary triumph to devastating tragedy. Led Zeppelin lived a life like no band before or since.

Over the years, Classic Rock has told the Led Zeppelin story. And now we’ve collected those features into one handy volume: the Classic Rock Led Zeppelin Special Edition. It’s 148 pages of great writing, pictures from some of the world’s best rock photographers, and some truly extraordinary stories.

It’s in the shops now. And you can buy it online.

The secret UK live debut
When people turned up to a Newcastle ballroom, they expected to see The New Yardbirds. Instead they saw the future of rock’n’roll.

Led Zeppelin I
As the 60s ended, session supremo Jimmy Page put together a band and a plan that would change rock forever – even if it did owe a whole lot to music’s past…

Led Zeppelin II
The making of the second album, recorded and conceived on the road.

Led Zeppelin III
Inspired by Welsh countryside, suffused with folk, acoustic and pastoral music, it was the Zeppelin album that confounded critics but truly brokered their legend.

Houses Of The Holy
The sound of Led Zeppelin at the top of their game. How it was made, what it means.

Physical Graffiti
Inside possibly the greatest double album ever made.

Eddie Kramer
Zeppelin’s trusted engineer gives us his side of the story.

Presence
In August 1975, Led Zep were about to begin another huge US tour – then disaster struck. But out of the wreckage climbed Presence, and an album Jimmy Page rates as one of their best.

In Through The Out Door
Geoff Barton on how Led Zeppelin left us with a whimper, rather than a bang.

John Bonham
John Bonham’s drumming powered Led Zep like the engine of a battleship. ‘Bonzo’ was irreplaceable, and his death in 1980 also did for his band.

Peter Grant
The biggest and best interview the Led Zeppelin manager ever gave.

The Oral History
Led Zeppelin fans, friends and insiders on what the greatest rock band of all time meant to them.

Phil Carson
Zep’s tour manager and Atlantic label head looks back on the days of thunder.

Life After Led Zeppelin
What Page, Plant and Jones did next – and the tracks every Zep fan should own.

The Jimmy Page Interview
Back in 2007, in the build up to the Led Zeppelin reunion gig, Classic Rock sat down for an exclusive two-part audience with the man himself.

The Reunion – reviewed
Led Zeppelin reunited and we were there – the first review of the show of the decade.

Where now for Led Zeppelin?
Promoting Celebration Day, the members of Zep looked back and forward. Is this the end?