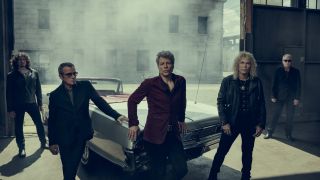 Bon Jovi have released a video for their track This House Is Not For Sale.

It’s the title track from Jon Bon Jovi and co’s upcoming album which will be released via Island/Universal Music Group, after the band’s acrimonious split with Mercury after more than 30 years.

Bon Jovi’s “fan album” Burning Bridges was released in 2015 and the bitter relationship was detailed in the record’s title track.

Speaking of their new material at the time, mainman Jon Bon Jovi said: “I have a lot to write about. Believe me, the new record is good. It’s pointed – it’s something we’re going to be very proud of when we put it out.”

Bon Jovi is joined in the lineup by David Bryan, Tico Torres, Hugh McDonald and Phil X. The follow-up to 2013’s What About Now will be the band’s first without guitarist Richie Sambora, who left soon after its release.

Further details on This House Is Not For Sale will be revealed in due course.

Last month, Jon Bon Jovi surprised wedding guests in Miami by joining in on a cover of the band’s 1986 hit Livin’ On A Prayer.