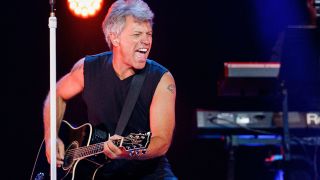 Bon Jovi have split with record label Mercury after 32 years – and frontman Jon Bon Jovi has told the whole bitter story in their song Burning Bridges.

It’s the title track of the band’s “fan album,” which has come ahead of their next fully-fledged studio release, expected next year.

Burning Bridges include the lyrics “After 30 years of loyalty, they let you dig the grave / Now maybe you can learn to sing or strum along / Well I’ll give you half the publishing / You’re why I wrote this song.”

He adds: “This hits it right in the head and tells you what happened. Listen to the lyrics. That’s that.”

And he insists the change bodes well for the band’s next album. “I have a lot to write about,” he says. “Believe me, the new record is good. It’s pointed – it’s something we’re going to be very proud of when we put it out.”

The follow-up to 2013’s What About Now will be Bon Jovi’s first without any input from guitarist Richie Sambora, who left soon after its release. The band launch a run of tour dates next month.