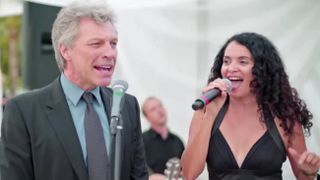 Jon Bon Jovi joined a Miami wedding band for a rendition of his band’s hit Livin’ On A Prayer.

The vocalist stunned guests at the wedding of a couple known only as Jennifer and Charlie when he joined jazz singer Lourdes Valentin on the stage. He initially declined the offer to get involved before finally getting up and singing a duet with Valentin.

A video of the performance shot by Cool Coconut Studios can be viewed below. Cool Coconut say: “It was great filming this wedding for Jennifer and Charlie, and it was amazing that Jon made such a surprise by coming onto the stage and singing Livin’ On A Prayer together with the local Jazz singer Lourdes. Everyone is really happy we got this on video.”

Bon Jovi confirmed earlier this year that they’d completed work on their 14th album This House Is Not For Sale, which is due for release this year via Island/Universal Music Group following the band’s acrimonious split with Mercury after more than 30 years.