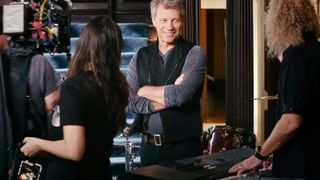 A clip from the behind-the-scenes video shoot

Bon Jovi have released a behind-the-scenes clip showing the work that went into making the video for their latest track This House Is Not For Sale.

They issued the promo earlier this month, with the track lifted from their upcoming 14th album of the same name. It’s scheduled to launch on October 21 via Island Records.

Explaining the house with roots theme in the video, mainman Jon Bon Jovi says: “ I came upon a photograph and it was a big old mansion of a house and the bottom half of it was the roots of a tree.

“It hit me like a ton of bricks because I said, ‘That’s everything I’m about right now.’ This picture tells the story – and the story should be a song.

“We’ve been through a lot in the last three years and that emotional roller coaster that I was on – well, pain brings out great songs. It really just sets up who we are and where we’re at in our careers.”

Keyboardist David Bryan adds: “This great image about the house, this big tree and roots – it’s all about where as a band we’ve been together and formed our roots in this world – and it’s not for sale.”

A final tracklist for This House Is Not For Sale will be revealed in due course.

Last week, the band’s former guitarist Richie Sambora and his partner Orianthi congratulated Bon Jovi on the single via a Twitter video. Bon Jovi responded: “Thanks Richie and Orianthi. Look forward to hearing your record too. All the best, JBJ.”