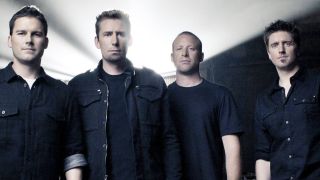 They recently recorded it during sessions for their ninth album, which is expected early next year. Listen to the track below.

Chad Kroeger and co say of the song: “Sometimes you play a song in the studio just for fun. And sometimes it’s so fun you have to record and share it with everyone.”

Nickelback are engaged in legal action against insurance giant Lloyds, who are refusing to cover the $13 million costs associated with cancelling a run of dates last year as a result of Kroeger’s vocal cord issues. Lloyds claim that he knew about the problem before the tour was arranged, but the band say that’s not true and the firm are simply trying to avoid paying out.

Their last release was 2014’s No Fixed Address.