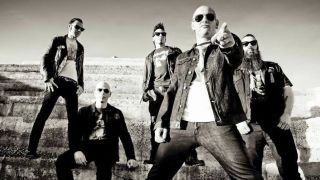 Stone Sour have made a demo version of their track Through Glass available to stream.

The song appeared on the band’s 2006 second album Come What(ever) May, which celebrates its 10th anniversary this month. The demo version can be heard below.

Frontman Corey Taylor says the track is a “very angry” rant at the reality TV show culture of music at the time.

He says: “I was sitting in a European hotel room watching a music video channel, seeing act after act after act of this insane, innocuous, plastic music. They were plastic, bubbly, gossamer-thin groups where it was really more about the clothes they wore and the length of their cheekbones than it was about the content of the song they were singing.

“It really made me mad. I was like, is this it? Have we just gone full circle? Did the singer/songwriter revolution never happen? Is it just the same drivel from the same replicate over and over again?

”Through Glass is really a very angry song. It’s me basically calling ‘bullshit’ on pretty much everyone involved with the American Idol-type shows. It has its place, but when you’re basically cornering the market and making it very hard for anyone who actually writes their own music to get ahead, then it’s wrong and that’s really why I wrote this song.”

Stone Sour are working on their sixth album, with Taylor previously saying the new material is “gonna destroy people.”

He said: “We have 18 songs demoed. It’s the best material we’ve ever written. This album, the next Stone Sour one, is going to eat people – it’s so good.