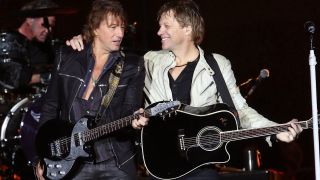 Richie Sambora has reached out to his former band Bon Jovi to congratulate them on the title track they released from their forthcoming album This House Is Not For Sale.

The follow-up to 2013’s What About Now is their first work without the guitarist – who exited the band in 2013 before their world tour, leading to a public war of words that eventually settled down. Their relationship appeared to be on the mend after frontman Jon invited Sambora to do the ‘ice bucket challenge’ in 2014.

This House Is Not For Sale will be released via Island/Universal Music Group on October 21, following the band’s acrimonious split with Mercury after more than 30 years.

Sambora says in a video message on Twitter: “Congratulations on the new single, man. God bless, good luck, hope you guys do great.”

Frontman Jon Bon Jovi replied, saying: “Thanks Richie and Orianthi. Look forward to hearing your record too. All the best, JBJ.”

Meanwhile, Sambora has taken a country direction on his upcoming album with collaborator and girlfriend Orianthi, who he has been dating since they met backstage at a show in 2013.

She said of the record: “I’m a big country fan. The great thing about country songs is the storytelling. They’re really moving and well-crafted, and that’s something Richie and I wanted to explore.”

They’ll tour the UK with Bad Company in October.