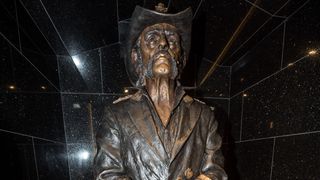 The life-size bronze sculpture was commissioned after fans and friends contributed to a fundraising campaign following Lemmy’s death in December.

Motorhead’s long-time manager Todd Singerman and Lemmy’s girlfriend Cheryl Keuleman attended the unveiling along with a number of rock and metal fans, who crammed into the venue on the Sunset Strip to see the 6ft statue for the first time.

Singerman tells the Press Association: “I look at him no differently than Johnny Cash, the Beatles and so on. He was real. He didn’t bullshit. The way he went on stage was the way he was at home. Go find that today.”

Speaking of the decision to locate the sculpture at the venue, Keuleman says: “The Rainbow was Lemmy’s home.”

When Motorhead Got Arrested in Finland