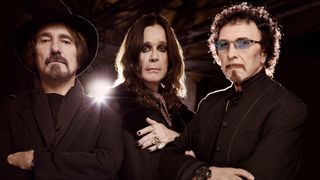 Black Sabbath will be crowned Golden Gods at next week’s Metal Hammer Golden Gods Awards in association with Orange Amplification.

The 15th annual event will be held at London’s IndigO2 at The O2 on Monday, June 12, which will be hosted by Fozzy frontman and WWE megastar Chris Jericho.

Black Sabbath guitarist Tony Iommi will be on hand to receive the night’s most prestigious award on behalf of the band, who brought the curtain down on their 49-year career with a pair of sold-out shows in their home town of Birmingham in February.

Bassist Geezer Butler says: “Thank you for this award. It’s good to know that after almost 50 years Sabbath is still relevant, and has its importance in the history of music.

“I want to thank our fans who have been with us along the way, without them there would be no Sabbath.”

“Without them, heavy music wouldn’t exist as we know and love it today, and it only seems right that in a year where we’re celebrating the power of our scene, we acknowledge the influence of the Mac Daddies themselves.”

Mastodon will headline the event, which will also see performances from Orange Goblin, Clutch and Avatar.

There will also be a collection on the evening for The Heavy Metal Truants – a charity cycling group founded by Iron Maiden manager Rod Smallwood and former Metal Hammer editor-in-chief Alexander Milas.

They’re currently preparing to cycle the 164-miles between London and this weekend’s Download Festival in Derby to raise money for Nordoff Robbins, the Teenage Cancer Trust and Childline.

Milas says: “The Heavy Metal Truants are truly one of a kind. Between the hills and the heat, the cycle to Download is nothing short of breathtaking, but it’s nothing compared with the work these charities do every day. If you’re planning to donate, please dig deep!”

No sleep 'til Metal Hammersmith! Behind the scenes at the 2016 Golden Gods