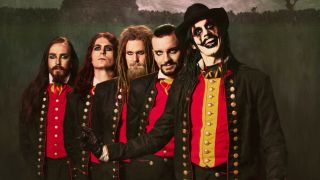 Avatar with play at the Metal Hammer Golden Gods

Avatar will play at this year’s Metal Hammer Golden Gods with Orange Amplification.

The Swedish outfit will perform at the 15th annual event at London’s IndigO2 at The O2 on Monday, June 12, which will be hosted by Fozzy frontman and WWE megastar Chris Jericho.

Metal Hammer editor Merlin Alderslade says: “When we confirmed that the Metal Hammer Golden Gods were back, we promised you a show – and few modern bands know how put on a show like Avatar.

“We can promise you won’t have seen anything quite like this. It’s gonna be wild!”

Earlier this week it was confirmed that Orange Goblin would kick-off the Golden Gods, which will be the biggest metal event of the year.

Voting is now underway with fans able to register their favourites by visiting the Metal Hammer Golden Gods website.

Editorial-chosen awards include Riff Lord presented by Century Media, Defender Of The Faith presented by Orange Amplification, Album Of The Year, Icon, Inspiration, Spirit Of Hammer and The Golden God.

Game Of The Year

The Legend Of Zelda: Breath Of The Wild
Overwatch
Mass Effect: Andromeda
Iron Maiden: The Legacy Of The Beast
Resident Evil 7: Biohazard