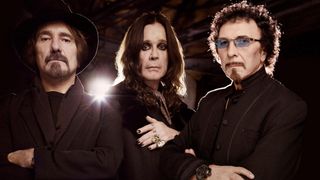 Black Sabbath brought the curtain down on their 49 year career with a pair of shows in their hometown of Birmingham over the weekend.

They played a total of 15 tracks, ending with their classic 1970 hit Paranoid in front of a sold out crowd at the city’s Genting Arena on Saturday night.

And to mark the event, the band have released footage of their final song and farewell to the fans.

Black Sabbath’s The End tour took in 81 dates across the world and saw them visit North and South America, Europe, Australia and New Zealand.

Speaking last year, frontman Ozzy Osbourne said: “We’re doing 80 shows – it’s good enough. I wouldn’t mind extending the tour for another few gigs. There’s a lot of people who won’t get to see us, but I don’t think it’s going to happen.

“We started off as four guys from Aston who had a dream, and it came true beyond our wildest dreams. We were manipulated, ripped off, conned. We lost each other within each other. But it’s great to have got this back just to end on a high note.”

In December, guitarist Tony Iommi said it was “possible” that Black Sabbath could record another album and make festival appearances.

He said: “I wouldn’t write that off, if one day that came about. That’s possible. Or even doing an album, because then you’re in one place. But I don’t know if that would happen.”