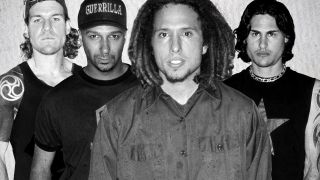 It was the album that started a musical revolution, and now, in a world exclusive interview, we talk to the band that made it happen. This month in Metal Hammer we celebrate 25 years of Rage Against The Machine, talking to the band (and producer Garth Richardson) about their game-changing debut, the chaotic 12 months that followed and the true story behind one of the most important (and controversial) eras in metal history. Plus, we find out why, with Prophets Of Rage, the battle continues.

From one band came a music revolution. This month in Hammer, we celebrate 25 years of Rage Against The Machine. We sat down with the band and producer Garth Richardson about the album that changed everything – and the amazing, chaotic twelve months that followed.

Plus, we look to the future with Prophets Of Rage and find out why the fight is only just beginning.

We also find out the truth about Austin Carlile’s departure from Of Mice & Men (spoiler: shit gets emotional).

We meet Ocean Grove, the Aussie newcomers who have gone and created their own scen…genr…*universe*?!

We head on tour with Bury Tomorrow across the UK…

….and Tesseract in South Africa! If there’s metal, we’ll find it.

Which is why we also head out to Lebanon to meet the bands risking their lives to play the music they love.

We also find out the maddening concept behind Sikth’s new album.

All of this plus:

Still Raging: Why the world needs a band like Prophets Of Rage