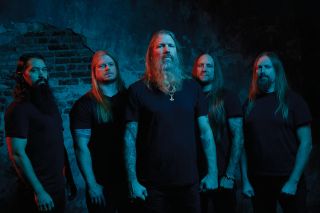 It’s named Berserker after their 2019 studio album, and it'll launch this coming Friday on iOS and Google Play, and is a standalone mini-game to their Amon Amarth game which came out back in 2017.

A statement on the game reads: “Grab your hammer and historically inaccurate horned helmet, it's time to crush your enemies!

“You control Thor, the God Of Thunder, in a brand new mobile gaming adventure set in the Amon Amarth game universe. This time he’s heading towards mother Earth to fight the evil King of England!”

Thor will slice and dice his way through knights, archers, cavalry and “crucifix-wielding monks” across seven levels in his quest to vanquish the king.

Berserker will feature three tracks from the album, with gamers also tasked with completing challenges for prizes.

From launch until April 30, players will be judged on their skills, with the top 100 receiving prizes, including  game merchandise such as a specially designed Amon Amarth t-shirt, a signed mini poster and “other glorious trophies for you to display with pride.”

Watch a trailer for Berserker below.

Amon Amarth will tour across South America later this month and into March with special guests Powerwolf.

Amon Amarth: Berserker
Amon Amarth released Berserker back in May 2019. The album features the singles Raven's Flight, Crack The Sky and Mjolner, Hammer Of Thor.View Deal