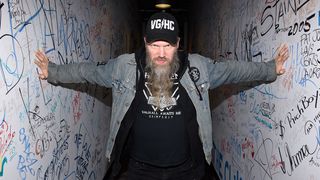 Johan Hegg is probably best known for his love of Vikings, beer and metal, but sit him down and press him for his thoughts on the big issues and he has a lot more to talk about than that. We caught up with the Amon Amarth frontman and picked his brains…

“I have a really weird relationship to my family. I think family is obviously important, but you can’t choose your family, so some people have good families, some have bad families. I think if they are supportive and it’s a loving family there’s almost nothing more important in the world. On the other hand… I mean I love my parents but I’m not really the person who keeps in touch a lot because… I’m too flaky ha ha. I always forget to phone my mom, I remember at midnight and think, ‘Guess I can’t call her now’. [My parents] have followed what I do on the internet though – they’ve only been to one show but that was fun, they were utterly impressed by what they saw.”

“Its kind of a necessary evil. I love doing the shows, but I hate travelling because you’re away so much. If someone would invent a transporter, like in Star Trek, I would get on it in a heartbeat. Sit at home, have dinner, ‘Oh it’s time for the show – beep!’. I think what you have to do is keep busy and try to make the most of the time, ‘cause it’s a lot of waiting, basically that’s what it is. Someone said to me a long time ago that this business is ‘Hurry up and wait’, and it’s so true, because you’re always supposed to be somewhere soon. And then you wait. I started getting more involved in planning the promo trips though because the people are fucking idiots, seriously, I don’t mind saying so. They will have you do a promo day in London and then they want you to fly to Paris – I mean how dumb can you be, there’s a train. Firstly, better for the environment and secondly, quicker than going down to Heathrow flying to Charles de Gaulle and all that shit…”

“Again, with the band it’s a necessary evil and you have to be on top of business to be able to do this and make a living from it. It is kind of demanding, but you have to take an interest in it. It’s a difficult thing, every musician wants to be able to make money and live off the music, but it’s getting harder and harder. We’ve been fortunate to be able to do this for ten years now as a full-time occupation, all of us, but still it’s constant work. Even when you’re on tour there’s still stuff you need to take care of. A lot of bands get signed to a label and think the work is done, that everything is going to get handed to them. That is not the case – if anything, you need to work harder, that’s just the way it is. If you want to be able to become successful you need to put in the hard work.”

“The fans are the most important thing to us, without them we wouldn’t be able to do this. So we always try to go the extra mile for fans, but it’s hard sometimes. You want to be there for everyone, but you can’t. I’m not big on social media but I try to do that, because a lot of people seem to think it’s important and love it, so I try and do that but I never know what to say – I never have anything interesting to say! But meeting fans, in 99.9% of cases, is absolutely phenomenal. Obviously there’s the odd one that is going to be strange, but you can deal with that.”

“The root of all evil. Don’t get me wrong, I think if you’re a spiritual person that’s fine, I think that’s up to the individual. I just think that religion is a power tool really, it’s meant to suppress people – and it’s kind of ridiculous as well. If you look at the major religions, or if you look at two of them, Christianity and Islam, I mean in history there haven’t been religions that have been more violent than those two, and they’re both supposedly religions of peace. I think religion in general is not good for people. It stops people from thinking critically and stops people from actually living healthy lives. I don’t know, I’ve never met more miserable people than religious people. It’s crazy. They should be happy! And I think there’s something to be said about that: if you believe after this life is a better life, I don’t see why you don’t just offer yourself right away ha ha. People are entitled to believe what they want, but it’s not logical and that’s the problem: religion actually tells people not to think.”

“I think history is super-interesting. I think history is important for us to move forward, but I think it’s dangerous to try to reverse the clock. That’s not really a good idea. Things tend to improve in society in general and we forget that times weren’t always great. I think it’s positive to rediscover some of the lost wisdom, some of the stuff that we knew about our environment in the north, but to think you can reverse the whole society, that’s not going to happen and I don’t think anyone would want that really. But if you look back in history I think there is something to be said for leading a simpler life and not getting too attached to possessions. How many iPads do you really need? Do you really need four TVs? You’re not living in a sports bar. Overconsumption is definitely one of the big problems of our society, so getting back to a more sustainable way of living and treating the environment better and everything… that’s a good thing.”

“I think without a doubt it’s been – apart from meeting my wife – it’s been the single most important thing in my life. Even when there was a period when I decided I wasn’t going to listen to music at all, as a teenager… when I started listening to music again, it became more important than it ever was and there was a piece of me that was missing during those years. Obviously it’s changed as well. When I was in my upper teens it was like, ‘If it isn’t metal, it’s shit’. Now I can widen my horizons a little bit. I mean I still listen mainly to metal and rock music, but now it’s if it’s not good, I don’t listen to it – there can be other music that is good and not all metal is good.”