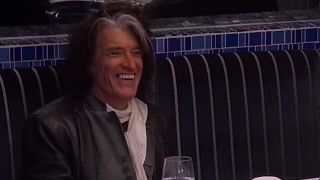 Aerosmith guitarist Joe Perry appeared as a guest diner on the latest episode of US TV show Hell’s Kitchen.

The show features celebrity chef Gordon Ramsay as he tries to narrow down a group of aspiring cooks to a single winner over the course of a season.

In the latest episode, aired on October 21, Ramsay’s celebrity guests were Perry and R&B star Estelle. A video clip of their arrival can be viewed below.

Perry collapsed while on tour with the Hollywood Vampires earlier this year and sat out a number of the supergroup’s shows. He returned two weeks later, but not before his Aerosmith bandmate Steven Tyler asked Hollywood Vampires frontman Alice Cooper not to put Perry back on stage.

“I went up to his room. He looked unbelievable, sounded great, got up and played the whole show. I never heard him play that good, so he’s back.”