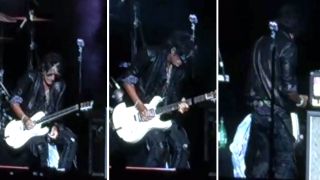 Fan video shows Perry sitting down then staggering off stage

He was seen to struggle during the show at the Ford Amphitheatre, before resting against the drum riser then stumbling off stage, where he collapsed.

The 65-year-old was attended by medical staff off stage, then carried out of the venue on a stretcher while the concert continued.

Unconfirmed sources suggest he suffered a heart attack. Instagram user Leeniepics said: “He had to sit on drum kit and then went behind a small wall and passed out. FDNY and NYPD carried him off quickly,” later adding: “Saw him rubbing his left arm.”

Hollywood Vampires frontman Alice Cooper tweeted this morning: “Thanks to everyone asking about our brother Joe. He is stable right now, with family and is under the best care.”

Cooper is reported to have said during the show: “If you notice one of our brothers is not on stage with us, he was very sick before the show.”

Perry posted a picture on Instagram a short time before the concert began showing him warming up with co-guitarist Tommy Henriksen.

Marilyn Manson offered his support for Perry on Twitter, posting a picture of himself with the band’s Johnny Depp with the caption: “These brothers shall put our hearts into our other brother Joe. And make it better. Please join in that.”