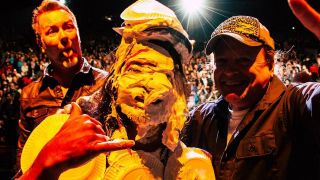 Trujillo celebrates his birthday by being pied

Metallica have released a clip of their acoustic Enter Sandman performance at the weekend.

It was part of their set at Neil Young’s annual Bridge School Benefit concert, which also included a guest appearance from Young himself.

The show also saw bassist Robert Trujillo being pelted with pies to mark his 52nd birthday.

Metallica are gearing up for the release of 10th album Hardwired… To Self-Destruct on November 18. They’ll launch Atlas, Rise!, the third track to appear from the record, on Halloween. A limited-edition seasonal mask goes on sale on October 28, which comes with an access code offering the chance to hear the song 30 minutes before its official release.

Drummer Lars Ulrich reported last week that Lulu, their controversial 2011 album with Lou Reed, had been instrumental in forging the direction of Hardwired… To Self-Destruct.

He said: “We’d do one take of something. We’d make it up as we were going along. There was this completely momentary, impulsive energy. That that kind of acceptance of the moment was something that we had never experienced.

“It definitely gave us a new way to interpret a creative process.”

Metallica commence a South American tour later this week with further dates to follow from January to April, and more to be announced in due course.