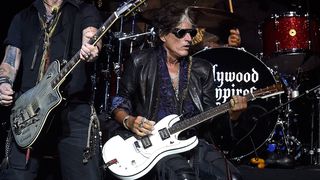 Aerosmith guitarist Joe Perry will rejoin supergroup The Hollywood Vampires on tour tonight (July 22) following the health scare that sent him to hospital during a show earlier this month.

He was seen to struggle during the performance in New York on July 10, then staggered off stage, where he collapsed and was stretchered out by emergency staff.

While the cause has not been officially provided, unconfirmed reports say he was suffering from dehydration and exhaustion, and was ordered by doctors to rest.

A brief Facebook statement says: “Joe will rejoin The Hollywood Vampires July 22. Catch the tour before it ends.”

Aerosmith frontman Steven Tyler revealed after the incident that he was concerned about the Vampires’ touring schedule and what it was doing to Perry, saying: “I know how to maintain my career, my health. I don’t think he knows how to.”

Suggesting the band were victims of “overbooking” he added: “I think they’re all little burnt. I think they may need to look at that. Not young any more, you know?”