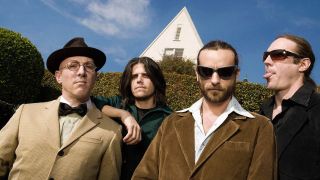 Tool guitarist Adam Jones has hailed bandmate Danny Carey for playing a festival set at the weekend despite suffering from a “very serious infection.”

The drummer was advised not to perform at AfterShock in California when doctors identified an attack by the staphylococcus bacterium, which causes minor skin problems but can also affect the heart and lungs.

Jones says via Instagram: “I truly have to respect Mr Danny Carey, who played the entire show with a very serious staph infection.

“At first on Friday morning he was misdiagnosed with a poisonous spider bite on his upper leg. Then later Friday night the quarter-sized wound was cut opened and drained.

“By Saturday DC was still aching from head to toe, and from what I heard, the local doctor recommended we skip the show. But Dan, with headaches and painful joints, played anyway.”

Meanwhile, Tool frontman Maynard James Keenan has revealed an excerpt from his upcoming biography, discussed how he began thinking about getting the band together.

He says via Rolling Stone: “The frustration I felt at that time is definitely what got this project off the ground. I believed I was on the right path. Then I lose everything and I’m living on $400 a month.

“It was that tipping point where you either become a serial killer or a rock star.”

The book, entitled A Perfect Union Of Contrary Things, is published on November 8. Tool complete a North American tour this month.