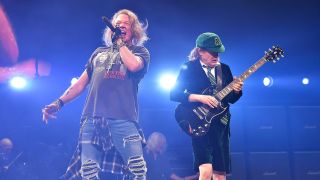 The Guns N’ Roses leader was invited to join the band after Brian Johnston was forced to stop playing in 2016 or face “total hearing loss.”

Rose went on to complete AC/DC’s Rock Or Bust tour dates, but there’s been nothing official from the Aussie giants since the tour wrapped up.

But last month, AC/DC biographer Murray Engleheart reported that he believed the band would continue on with Axl at the helm for a “new album, touring, the whole nine yards.”

Now Anderson says in an interview with The Rock Pit: “I was talking to Angus earlier last year when we were doing the encores and we were opening for Guns ‘N’ Roses. I said to him, ‘What are you going to do?’ He said, ‘Mate, I’m writing a new album.’

Anderson adds: “Brian’s not there, Phil’s not there, Cliff’s not there, sadly Malcolm’s not there. Yes it’s sad that the original lineup aren’t there any more, but it’s the songs – people who have supported them all the way through their career, they want to hear the songs.”

Despite having to miss out on AC/DC’s live shows, former singer Johnston later reported he was working with audio experts Asius on a solution to his hearing problems and has since appeared onstage with Mick Fleetwood’s band, Robert Plant & Paul Rodgers and Muse.

Opinion: Why AC/DC should make an album with Axl Rose