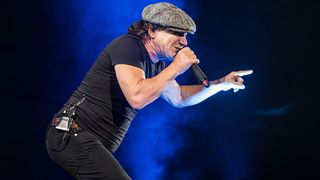 Video footage has emerged of former AC/DC frontman Brian Johnson singing (Get Your Kicks on) Route 66 with Mick Fleetwood and his band.

The performance took place at the Fleetwood Mac drummer’s restaurant in Lahaina, Maui, earlier this week.

Watch the fan-shot footage below.

Johnson was forced to take a step back from playing in 2016 after suffering hearing problems. Axl Rose stepped into the fold to complete AC/DC’s Rock Or Bust tour dates, with Johnson later reporting he was working with audio experts Asius on a solution.

Since then, he’s appeared with Robert Plant and Paul Rodgers, and took to the stage with Muse at last year’s Reading Festival.