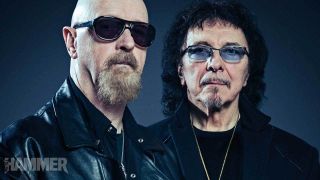 Two legends. One interview. For our new issue, we made history by uniting Judas Priest’s Rob Halford and Black Sabbath’s Tony Iommi for a once in a lifetime cover.

For the first time ever, the two metal titans sat down together talk about their amazing careers, their influence on our culture and what they think of where metal is at today. It’s a candid, heartwarming and eye-opening chat between two cornerstones of heavy music – and you don’t want to miss it.

And that’s not the only world exclusive we’re packing this issue.

For the first time, we also united all four members of the classic Sepultura lineup – Matt, Igor, Andreas and Paulo – to tell the true story behind the year that tore them apart, and settle those reunion rumours once and for all.

Plus, we asked Megadeth legend Dave Mustaine to give us his thoughts on Slayer calling it a day, and what it means for metal.

We also talk to Lovebites about the generation of women leading a new wave of Japanese metal.

And ask how a goofy idea for one song led to Alestorm becoming one of the biggest metal bands in Britain, as they celebrate ten years of pirate tomfoolery (yep, Alestorm are 10. We’re old now).

What unites Mastodon, Tool and sea animals? We find out when we dip into the strange world of Legend Of The Seagullmen, the world’s most bizarre new supergroup.

And meet the men behind the most exciting and filthily heavy debut album of 2018 – Conjurer!

In this month’s Subterranea, we find out why Primordial’s latest opus demands to be heard, and why the message behind it is one we should all take very seriously.

We also talk to Between The Buried And Me about the technology-induced nightmare that influenced their outstanding new album.

We head to Afghanistan to meet the band risking their lives to play heavy music.

And chat to Turnstile about how they managed to get approximately 18,847 influences into one amazing, 30-minute new album.

We also introduce you to Vile Creature – the self-described “weird queer kids” who are using heavy music to fight bigotry in the metal scene.

And, in a truly fascinating interview, we travel to Chicago to find Andrew WK in an unexpected state of mind. Just trust us when we say you won’t be expecting this.

All this plus Kaoteon, Anna Von Hausswolff, Myles Kennedy, Parkway Drive, Orange Goblin, Architects, Asking Alexandria AND a free CD?! We’re spoiling you. We really are.

The new issue of Metal Hammer is in stores now and is available to order online. If you’re in the UK, you can use our store locator to find your nearest Metal Hammer stockist.

Metal Hammer issue 307 is also available to read digitally by signing up to TeamRock+.

Tony Iommi and Rob Halford on the past, present and future of metal