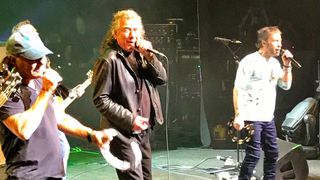 The live performance marked a return to the stage for Johnson, who was forced to bow out of AC/DC in March last year after doctors warned him he faced total hearing loss if he continued. The band hired Guns N’ Roses frontman Axl Rose to complete their Rock Or Bust world tour.

Johnson said at the time: “My entire focus is to continue medical treatment to improve my hearing. I am hoping that in time my hearing will improve and allow me to return to live concert performances. While the outcome is uncertain, my attitude is optimistic.”

He’s been working with audio experts Asius on a solution with their chief scientist Stephen Ambrose telling TeamRock in October that Johnson could return to performing live “within six months to a year.”

It had been rumoured that Plant, guitarist Jimmy Page and bassist John Paul Jones could get back together for an appearance at California’s Desert Trip 2017.

However, late last week, organiser Paul Tollett confirmed that the festival which last year featured the Rolling Stones, Bob Dylan, Paul McCartney, Neil Young, the Who and Roger Waters, would not return in 2017.

Rodgers’ tour dates continue on May 17 with a show at Leicester’s De Montfort Hall. Find a list of live dates below.