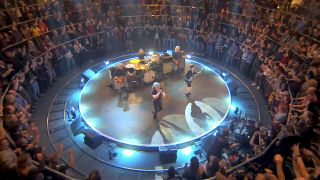 AC/DC have released their video for Rock Or Bust, the title track from their 17th album, out next week.

It features guitarist Stevie Young in place of mainman Malcolm, who’s retired due to dementia, and drummer Bob Richards standing in for Phil Rudd, whose future remains in doubt pending a court appearance for threatening to kill.

Video director David Mallet recently insisted the Aussie giants remained as valid as ever despite their recent woes, saying: “It’s just as thrilling doing stuff with them now as it was all those years ago. That’s because the records are just as good.”

Frontman Brian Johnson last week took on Kiss star Gene Simmons for his “rock is dead” claim, saying: “With all due respect to the lad, he’s terribly wrong.”

Rock Or Bust is launched on December 1, and AC/DC plan to tour next year.