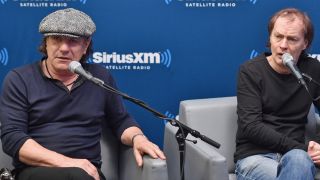 And he’s emphasised that the band will hit the road next year with or without him.

Rudd, 60, is under house arrest at his New Zealand home after being accused of threatening to kill and possession of drugs. The charge of attempting to procure the murder of two men was dropped for lack of evidence – but he could still face up to seven years in jail.

The band have reported that he’d been behaving erratically in the run-up to his legal woes. Guitarist Angus Young has said it was difficult to keep him at work while they recorded upcoming album Rock Or Bust, and that he failed to appear for a London video shoot without warning.

Now Johnson tells Howard Stern on SiriusXM: “I don’t think we have to do anything – fire him or anything like that. I think the situation is going to take care of itself.

“He’s got himself into a pickle and there’s nothing we can do about it. We’re talking about criminal courts, judges and juries. But we are going to go on tour, and nothing’s going to stop us.”

Asked about his reaction to the news of Rudd’s arrest, Young says: “I fell out of bed, actually. My wife woke me up and said, ‘Hey, Phil’s been up to no good. Somebody said, ‘Who was he trying to hit – his dentist or his drug dealer?’”

AC/DC have had no contact with the drummer since the drama began. He was replaced by Welsh drummer Bob Richards of Buck & Evans for the video shoot. Rock Or Bust is released on December 1 – it’s their first album without retired mainman Malcolm Young.