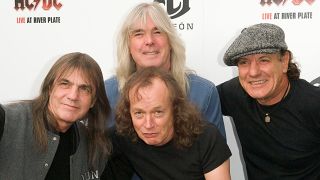 And the health issues that caused his retirement began appearing before they’d made 2008 record Black Ice, reveals the only remaining original member.

Malcolm’s family confirmed in September that his dementia had advanced to a stage that meant his career was over. Rock Or Bust was recorded with nephew Stevie Young in his place.

Angus tells Rolling Stone: “It’s something that had been happening for a long time. The symptoms had surfaced even before the last project. He was still capable of knowing what he wanted to do.

“I said to him, ‘Do you want to go through with what we’re doing?’ And he said, ‘Shit, yeah.’ He liked to finish what he started.”

Malcolm’s condition meant he had forgotten some of the classic riffs he’d written, and he was receiving treatment during the Aussie giants’ Black Ice world tour from 2008 to 2010. “He had to relearn a lot of things,” Angus says. “It was very strange for him. But he was always a confident guy, and we made it work.

“He still likes his music. We make sure he has his Chuck Berry, a little Buddy Holly.”

Meanwhile, Angus reports that the band haven’t spoken to drummer Phil Rudd since his arrest earlier this month. He’ll appear in court on November 27, accused of threatening to kill and possession of drugs, and faces a jail term of up to seven years if found guilty of all charges.

“We haven’t had contact,” says the guitarist. “He’s got himself in a pickle. We had a few issues with him – it was hard even to get him to do the recording. Then he was supposed to do promos with us, video shoots and a few other things, and he never showed up for that. It’s a pretty tough call for us.”

Angus last week described Rudd as “not the guy he used to be.” Rock Or Bust, AC/DC’s 17th studio album, is released on December 1. The band took part in a Reddit AMA over the weekend, answering a variety of fans’ questions.