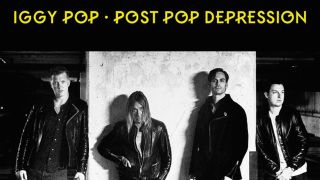 Following two softer, Francophile-leaning records (2009’s Préliminaires and 2012’s mostly French-sung Après), Post Pop Depression will come as something of a relief to anyone missing the knarlier, proto-punk Iggy Pop of the 70s.

Not that it’s a mere homage to those days, or that it’s lacking in light and shade. Teamed with QOTSA’s Josh Homme – an ingenious pairing if ever we heard one – the Stooges founder has made his best album in years.

Sound-wise, producer Homme’s desert rock experience is writ large across most of the songs. As, indeed, is the experience of bandmates Matt Helders (Arctic Monkeys drummer) and Dean Fertita (Raconteurs/QOTSA/Dead Weather man), though the record never feels overcrowded. Songwriting duties are spread across all four players, but all serve to create an archetypally Iggy-ish record.

Opener/single Break Into Your Heart combines that iconic, velvety-cigarette drawl with raw, atmospheric production to hypnotic effect, while American Valhalla is all seductive, swaggering bass groove and dark 70s garage tones. And as previously implied, Helders and Fertita are no bit-parts. The Helders-penned Gardenia is a mischievous, darkly pretty album highlight, and closer Paraguay – co-written by Fertita and Helders, somewhere between a Spaghetti Western soundtrack and a punk manifesto – makes a deliciously spiky final impression (youthful without being ‘try-hard’).

It’s classic Iggy Pop, from a current, revitalised rock perspective. Whether you listen as a longtime fan or otherwise, Post Pop Depression just works so well you’d hardly be surprised if the Pop/Homme partnership remained (if this doesn’t turn out to be Iggy’s swansong, that is).