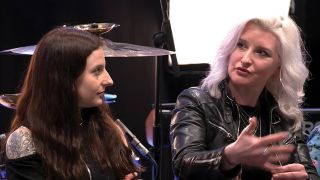 In this new excerpt the panel talk about female representation at gigs, and whether they hear from other women who have been inspired by them.

Cellar Darling are currently on tour in Europe.

Heather Findlay will tour the UK in January.

Jacqui McShee is on tour this month.

Tickets for Radar Festival 2020 are on sale now.

Iamthemorning's new album The Bell is out now.

Magenta's Live At Acapela album is out November 4.