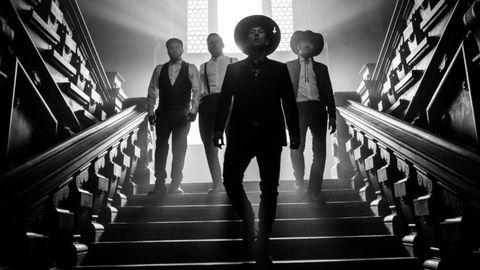 Looking for a bona fide modern rock star? Behemoth mainman Adam ‘Nergal’ Darski is the answer to all your, well, prayers may be the wrong word. A true iconoclast in his native Poland, he took a left-hand turn from the blackened bombast of Behemoth in 2017 to release a blues rock record – Me And That Man’s Songs Of Love And Death. It fell a little flat, his vocal somehow lacking the requisite soul.

It’s perhaps for this reason that he’s changed tack for album two, inviting a whole host of guest singers along for the ride to tell his outsider tales. Musically it’s an ode to Americana if ever you’ve heard one, revelling in blues, folk and country. Run With The Devil, featuring Shining (NO)’s Jørgen Munkeby, makes for a raunchy opener worthy of the Blues Brothers.

Album mid-point Mestwo is the only track to feature Nergal on lead vocals and it’s an upbeat ditty sung in his native Polish. How Come is soaked in melodramatic organ and full of wistful power boosted by big hitters Corey Taylor and Mastodon’s Brent Hinds before suicidal black metal nihilist Niklas Kvarforth of (the other, Swedish) Shining closes the record with soulful hellfire on Confession.

All in all, New Man, New Songs, Shame Shit Vol. 1 is a bigger, bolder, more polished affair than its predecessor, but if anything it suffers again from a lack of identity, albeit this time from the multitude of strong voices on offer rather than the inadequacies of one. It’s still great fun – a celebration of friends, outlaws and Satan that will only serve to add to the notoriety of metal’s very own man in black.

Me And That Man's New Man, New Songs, Same Shit, Vol.1 is out now via Napalm Records