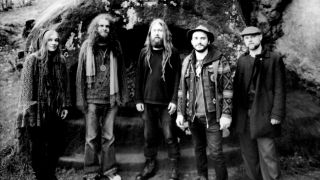 Wimbledon to Helsinki may not be the most arduous of physical international journeys, but most musicians would find it too challenging for their creative and personal wellbeing. Yet it’s a relocation that’s been the making of Mat McNerney, the south London-born helmsman of rising Norwegian psych-folk-rock outfit Hexvessel.

The band’s new, third album When We Are Death has them leaving their deepest and most authoritative footprint yet, exploring the relatively uncharted territory in which erstwhile black metal tendencies are filtered through folk to create something strangely undefinable. And for McNerney, that’s mission accomplished.

“I just say it’s like psychedelic folk rock,” he tells Prog via a Skype call from his adopted home. “But it’s really hard, because when you say folk rock, it conjures up something quite horrible. You think about corduroys and brown shoes, and just this very adult, dad music, which it isn’t.

“I’d be quite comfortable with being genre-less, the way Swans or Current 93 are, groups like that. Not that we sound anything like them and I wouldn’t say we’re anything near as great as Swans, but I always try to think of what the genre is that we play, and I don’t figure it out. We do fit more into a progressive rock world because I’ve progressed out of the black metal scene, and the music we’re playing has lots of crossover elements to it.”

If the folk elements are less palpable on When We Are Death than they were on Hexvessel’s earlier voyages, notably 2011’s debut Dawnbearer, they’re still part of the mix for a songwriter who grew up on Paul Simon. That’s before he left the UK for assorted European adventures in Holland and Norway, then ‘finnished’ up where he is now. And we promise that will be the last pun on the subject.

“I lived in the Netherlands for a few years,” says McNerney. “I was kind of commuting over and back to Norway. I had a black metal band [Dødheimsgard] and then I eventually moved over here to Finland, and I’ve been here six or seven years.

“I felt like I was taking a jump into obscurity, but I wanted to be able to concentrate on the things I wanted in life. I’ve always had a struggle with line-ups and finding the right atmosphere, but the climate and the temperament here suits me very well, in terms of approaching music.

“In Britain, and London in particular, it’s very competitive, so you’re really up against it, but here the pressure is definitely off,” McNerney adds. “I think that’s why psychedelic music might be such a strong force here. People have the time and relaxation and patience, and the attitude is much more laid-back.

“With that isolation in the culture here and the fact that it’s such a vast landscape with very few people, you have a lot of time to contemplate and then that infects your songwriting,” he says. “You’re taking time to make those points and tell those stories in as simple a way as possible.”

McNerney believes that this also helps explain the strong history of prog in the region. “In the 70s, they had a really rich scene. You look at bands like Wigwam and Tasavallan Presidentti, both of whom had an English singer or songwriter. There might be something in that, my role in the band being the activator. Maybe it works quite well with Finnish musicians – being quite laid-back, they maybe need a character like that.”

When We Are Death is, says the frontman, such a definitive replanting of the Hexvessel sound as to feel like a new beginning. “The first record was more of a solo effort,” he avows. “The two releases after that [No Holier Temple in 2012 and the following year’s Iron Marsh EP] were us working through playing together.

“Then we toured with Alcest and also with Sabbath Assembly, and the line-up got really strong. So this was the first record with the completed line-up, and it’s feeling like this is almost like our first record together. It’s like a new start for the band.”

An album titled When We Are Death may hint at doom and nihilism, but McNerney argues that the opposite is the case. “You might get an idea of that, but it’s definitely from a different place,” he says, focusing on a deceptively uplifting song from it called When I’m Dead. “A friend and I had a really good moment of connection, and he said, ‘I’ll remember you when I’m dead.’ It’s a fantastic idea, when you love someone so much, and it’s supposed to be a happy song.”

In such positivity, he concludes, lies Hexvessel’s new motivation, which they’ll share on the imminent UK dates of their European tour. “I’ve always played with the dark and light, love and death imagery,” says McNerney, “but I think this record is the first one in which I’m really trying to say something through that and use that imagery to tell a story, and also reflect on my own life.

“I definitely feel it’s my first attempt at writing songs that people can relate to, rather than just draw up a negative atmosphere. That’s the thing about black metal, you’re not meant to care about the audience. You’re throwing up negative energy and you really couldn’t care if it sends people to hell, and they throw themselves under a bridge. I thoroughly enjoy indulging in that kind of music, but I think I had enough of doing that myself.”

The band’s now extensive live experience has also fuelled their new affirmative approach. “When we toured, we met people in different parts of Europe who were very poor and had a very different lifestyle, and they said the music had really helped them, they’d had a really good uplifting feeling from listening to Hexvessel.

“I took that inside. That’s how I felt when I was a kid, going through tough times. Music would be a good way to escape all your troubles. I think of that a lot with Hexvessel. It could be a good energy. White magic, if you like.”

When We Are Death is out now on Secret Trees/Century Media. Hexvessel’s European tour includes UK dates in Leeds, London and Brighton in April. For the full list of dates, visit the band’s website.