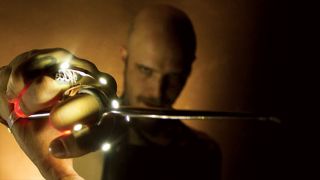 In fairness to the large numbers of inquisitive hacks who have probed Shining’s Niklas Kvarforth over the years, the Swede really has brought this problem upon himself. For the last 21 years, his band have administered the metal underground with regular, jolting doses of much-needed danger, volatility and fury, as Niklas’s own struggles with schizophrenia, bipolar disorder and a self-destructive streak a mile wide have provided an often disturbing but always believable backdrop of chaos and cliff’s-edge tension.

In essence, the story of Shining has always been the story of one man’s internal and external conflicts. But despite that constant bearing of his soul, the recent release of filmmaker Claudio Marino’s Cold Void documentary has shone a light into Niklas’s psyche like never before. An artful but insightful one- man conversation about dealing with long-term mental illness and its impact on the creative process, it seems a remarkably personal and, dare it be said, socially helpful thing for someone so notoriously scornful of the human race to do. Coinciding with the release of the new Shining album, X: Varg Utan Flock, which is manifestly their strongest album in many years, the documentary suggests that a more thoughtful Niklas Kvarforth is steadily emerging from the mayhem of the past.

“Well, I was extremely fucking sceptical about doing this in the beginning, because we’ve been working on our own Shining documentary for the last seven or eight years, so to have someone else make a documentary right now would be like throwing away years of work,” he states. “But that wasn’t Claudio’s intention. He was more interested in how it is to be an artist and work with these mental conditions, how that forms you and the complications you have to undergo to be able to survive in a world where you have to socialise with people and do things that demand a lot, maybe too much, from people with my diagnosis.”

If it was anyone else saying this, polite applause would traditionally follow. But Niklas has often proclaimed that Shining exists “as a weapon” against mankind, whereby the listener is assailed with a blizzard of suicidal thoughts and feelings: the end result being that that desire to leave this mortal realm will be transferred to the audience. Somehow a poignant documentary about surviving a mental health condition seems slightly at odds with his trademark misanthropy. Not entirely surprisingly, Niklas has thought the whole thing through.

“I just thought that because of the way the contemporary world is, where people are basically sitting on the internet and having opinions about everything and, in some disgusting way, having the tendency to spread those opinions, it would be good to tell the truth. Maybe if we did it in a way where I talked about childhood and diseases and the system, how it works with patients like me, I thought that would be a pretty good thing. I honestly don’t give a fuck if people doubt what Shining is all about, but at the end of the day this might explain a few things and hopefully get people to delve deeper into the subject…”

He pauses for a full five seconds.

“…and hopefully fuck themselves up in the end, too.”

You won’t find many major figures in the metal underground repeatedly avowing that their main creative aim is to bully other people into the grave, but then at least Niklas has been thematically consistent over the years. Musically, too, Shining have ploughed a singular furrow, ostensibly rooted in black metal but by no means limited by it, but X: Varg Utan Flock emits a palpably different atmosphere than any previous album. From the explosive opening moments of Svart Ostoppbar Eld, it’s a remarkably focused and weirdly accessible collection of pitch- black diatribes and mournful elegies, all delivered – one notable line aside, of which more later – in the Swede’s native tongue and with vitriol and despair dripping from every syllable. Wildly, unnervingly atmospheric, it’s more a subtle evolutionary step than a radical departure, but Niklas acknowledges that something feels very different this time round.

“It’s something otherworldly. It’s an anger that hasn’t been there, together with a sorrow,” he explains. “The contrast is there in whatever kind of music I write and the dynamics are always there in my music, but this is the first time I’ve combined extreme anger with a real sadness…” He catches his breath. “It makes me emotional just thinking about it. That should be a good thing, I guess.”

The circumstances under which Niklas wrote the songs on the new album clearly played a huge part in attaining that tricky-to-define switch of atmosphere.

“I left Sweden and went on a search for a new home, travelling to different countries in Europe. I took my guitar and I just started to write music here and there. It’s something I’ve never done before, just sitting and creating something out of nothing. It was a really weird experience and I hope to never do it again. While I was travelling I was going through some pretty fucking harsh personal issues. I had this immense anger inside of me. I’ve always been a pretty angry guy but this was over-the-top, completely irrational. But something good came out of it. It gave Shining an edge that it hasn’t had for a long time. This album was mostly driven by anger and a very, very severe mood for retribution.”

On an album full of unsettling vignettes, closing track Mot Aokigahara takes the despondent biscuit. Midway through, Niklas calmly repeats the following phrase: ‘I was born December 1983 and I died December 2017.’ It’s a jaw-dropping moment that conjures menace, mystery and mischief in equal measure. It also, all knee-jerk reactions aside, seems to be a profound statement about how Niklas and Shining have changed and become something else, something other, again. But as Niklas states with some amusement, the whole thing would have had a lot more impact had X: Varg Utan Flock stuck with its original planned release date.

“We were supposed to release the album in December, but with politics and record labels, sometimes things don’t work out and now it’s been moved to January 2018. Very smart… the same day as the new Watain album! Ha ha ha! Maybe someone will get fired for that. It’s pretty fucking funny. But you’re on the right track, that quote is about rebirth. It starts with the first track, Svart Ostoppbar Eld, roughly translated to ‘black unstoppable fire’. It’s basically about me grabbing an axe, cutting down my family tree, denouncing my family and being reborn through fire.”

For a man whose reputation hinges on his self-destructive impulses and capacity for chaos, Niklas seems to have his shit together right now. Armed with his strongest album in years and with several other projects in the pipeline – including two books and a new band, Lice, also featuring members of cult heroes Teitanblood – his race to total obliteration seems to have slowed a little, even if it remains a mug’s game to expect anything other than the unexpected from this most troubled of blackened souls.

“I’m not the kind of guy who plans things. To quote the Joker, I just do things,” he growls. “I try to consume myself with the work and the business side of things, but sometimes it’s hard when you wake up and you can’t do the job properly. Living with these diseases can be fucking unbearable. But things look quite bright in the future if I can just get control of myself.”

X: Varg Utan Flock is released on January 5 via Season Of Mist