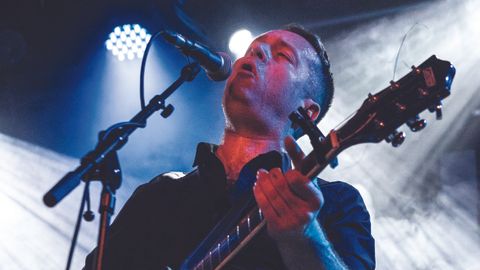 With a roster as impressive as German label Ván’s, who can blame them for wanting to bring that talent together and show it off? It means an awkwardly early start to the evening, though, and most are still arriving or assessing the merch as Germans (DOLCH) [6] begin. Their heavily atmospheric, mildly industrialised blackened metal contains as many shades of Chelsea Wolfe as of Emperor, yet their unimposing onslaught passes too many by. In fact it quickly becomes clear that there is one band most are here to see: THE RUINS OF BEVERAST [8]. Merch perused and pints bought, immersing in the German’s spectral noise is like plunging into a black metal-orchestrated version of that black and white episode of Twin Peaks. They’re serious and immobile onstage, but the sheer elemental unease summoned by opener Exuvia – from the new LP of the same name – is elevating all in itself. And like Twin Peaks, it only gets more disorientating and engrossing from there… All too much for some, disappointingly, as few return for KING DUDE [6]. This exodus, coupled with Mr Dude stopping mid-number (twice!) to call-out some knuckle-dragger for harassing a woman, plus some ill-delivered jokes about London, render the rare full-band show weirdly flatter than his usual lone-troubadour outings, despite a gnawingly great rumble through Jesus In The Courtyard.