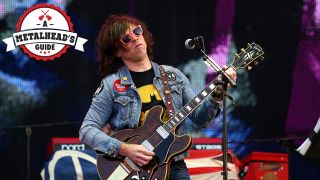 We who toil beneath the iron banner of Metal Hammer tend to speak to lots and lots of musicians hailing from metal’s many splendid genres, nations and stature, and a common thread is that precious few listen exclusively to music from their own genre. A healthy curiosity, if not an unquenchable craving for new sounds is a dominant characteristic of the songwriter’s mind and more often than not, such heavy visionaries seek some measure of tonal balance on the softer end of the dial.

For many, Americana offers a vibrantly melodic outlet for exploring lofty, textured melodies without sacrificing the edge and authenticity of the music they play. Understandably, many (including some critics), relegate Americana to some dreary no man’s land between folk and country, but in fact it sprang from something far more combustible and loud – a deeply soulful distillation of America’s gnarled, thorny roots, including foot-stomping Delta blues, broken-soul coal mining dirges from West Virginia, eye-watering Depression-era country standards and the ornery ghost of Hank fucking Williams.

While artists like The Byrds and Neil Young influenced the genre to varying degrees, Americana wasn’t fully-realised until the ‘90s (formalised as a distinct radio format in 1995), in a baptismal flash flood of surly barroom anthems and misty-eyed ballads conjured by a legion of disaffected kids across rural America who were as fluent in Kiss and Zeppelin as they were in Johnny Cash and George Jones. This list isn’t meant to suggest the greatest Americana offerings of all time, but for those lazy winter Sundays while you’re making the coffee and don’t plan on leaving the house, here are some captivating offerings that will whisper sweet nothings to your blackened metal heart.

**Uncle Tupelo
**Uncle Tupelo were the Metallica of Americana, fronted by two visionary and perennially-feuding songwriters – Jeff Tweedy and Jay Farrar. Uncle Tupelo would eventually implode from infighting, not unlike the Dave Mustaine days of their Bay Area colleagues, and split into two of the movement’s most important bands (Wilco and Son Volt, respectively). Unlike Metallica however, this line-up yielded four monumental Americana albums that served up an achingly-gorgeous amalgam of bare-knuckled punk and mournful country standards before hanging it up in 1994. These four records offered the blueprint from which much of the ensuing movement would emerge.

Mark Kozelek – What’s Next To The Moon (2001)
Anybody with a chord book and a thrift-store hollow body can bash out some simple acoustic Acca Dacca covers, but Kozelek entirely rearranges ten Bon Scott-era AC/DC classics into something so haunting and intimate that it’s nearly impossible to hear the originals. Lest there be any doubt as to his early allegiances, two years later Mark would release one of his most popular live songs with his band Sun Kil Moon — a spectral elegy called “Glenn Tipton.”

Ryan Adams
You’d be hard-pressed to find a more prolific or stylistically-ambitious American songwriter in the past twenty years than Ryan Adams. In 1997, his band Whiskeytown released Strangers Almanac, a ruinously-affecting alt-country confessional that converted a lifetime of bar-slapping regret into one of the best Americana albums of all time. Adams would later strike out on his own, releasing fifteen albums in as many years, including an utterly impossible-to-find sci-fi metal album called Orion (available only on vinyl) and famously covering Iron Maiden for the Californication soundtrack.

**The Rugburns – Morning Wood (1994)
**Metal fans love a good middle finger at the establishment and in 1994, Steve Poltz and the Rugburns removed all of the piss from Americana’s increasingly self-important genre snobs, setting the west coast alight with Morning Wood. This stupidly-catchy folk rock odyssey veered sharply from the depressing lyrical strictures of breakups and blue collar strife, instead celebrating the libertine delights of snorting coke at Denny’s, chatting up hookers in motel rooms and the sublime pleasure of dying wasted in a room with Eddie Vedder.

Golden Smog – Stay Golden, Smog: The Best Of Golden Smog - The Rykodisc Years (2008)
An Americana supergroup boasting members of Uncle Tupelo/Wilco, Soul Asylum, the Jayhawks and Run Westy Run, Golden Smog released a pair of all-original material that masterfully showcased each respective member’s distinct voice while simultaneously delivering a unified sound underpinned by radiant harmonies, raggedly spontaneous fretwork and power hooks so big you have to park them outside. As should be the case with any ‘Best of,’ compilation, there’s not a track wasted. An excellent palate cleanser after prolonged stretches of doom or drone metal.

Lucinda Williams
Although she won a Grammy in 1994 for Best Country Song, Williams is a dyed-in-the-wool rocker, collaborating with a pantheon of classic rock heroes and releasing back-to-back masterpieces with Car Wheels On A Gravel Road and Essence. Eventually hooking up with the virtuosic Doug Pettibone — one of America’s most electrifying sidemen — she covered AC/DC’s It’s A Long Way To The Top on 2008’s Little Honey and her live shows deliver a rapturously sleazy feast of howling blues, outlaw country and fragile, bar-silencing balladry.

Wilco
After splitting from Uncle Tupelo, Tweedy founded Wilco, releasing his own alt-country canon – A.M. – a breezy stretch of beer-battered power-pop that owed as much to Mott The Hoople as to Hank Williams. Fans of Opeth and Anathema will find much to love in Wilco’s evolution into noisy, post-rock deconstructionists on albums like Yankee Hotel Foxtrot and A Ghost Is Born. One of the forefathers of the Americana movement, Tweedy’s effervescent nod to his heavy metal youth remains one of Wilco’s enduring moments.

Son Volt – Trace (1995)
Many regard Son Volt’s winsome, pedal-drenched debut as the ultimate Americana album. What’s in it for a metalhead, you ask? It’s Saturday morning, your head feels like it’s been kicked by a horse and you’re not entirely clear on what you said last night, but you’re pretty sure you’ve got some apologising to do. Turn your phone off, throw on Trace and worry about it all on Monday.

A Metalhead's Guide To... British Sitcoms