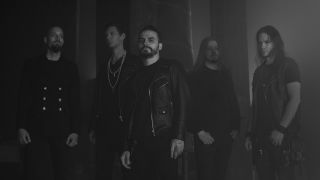 Whether in their current incarnation or under their previous moniker Beastmilk, Finnish five-piece Grave Pleasures have been one of the most talked about bands in metal’s underground for the last few years. Taking their cues from the dark worlds of post-punk and extreme metal, Grave Pleasures are truly unique. Check out their new video for Deadenders for proof!

We spoke to frontman Mat “Kvohst” McNerney about just how this odd amalgam of underground musicians have found their way to the brink of mainstream success, and why you need to get on board with them now.

They Are The Sound Of Two Worlds Colliding

“I grew up in England listening to all of the ‘80s post-punk bands, like Bauhaus, Killing Joke and PiL, so when I moved over to Iceland I think that I brought that sound and influence over with me to people that had grown up with the extreme and black metal scene. And because that combination is very unusual, it means that we sit alone as an island. I don’t really see any other bands taking influences from the same area as us, so it means that no one sounds like we do, and that’s precisely our intention. We have the extreme metal fans coming to see us in Europe because of the other guys’ connection to that world, but in the UK we get a lot of the old school punks at our gigs.”

They Are Taking On The Mainstream Alone

“It was quite a coup for the scene for us to sign to Columbia Records; it showed that it was a serious thing. When we were growing up there was no precedent for Danzig, there was no other band that sounded like that, so it wasn’t like there was a mainstream path for this type of thing. You used to get one or two bands break through into a more commercial world that were totally on their own and doing their own thing, and that, to me, made them even more powerful. Think of Danzig or Type O Negative, that’s what we want to be able to do. The label might have insinuated that we would be better if we compromised our sound and made it a little easier to digest, but I think that would have the opposite impact. I don’t see us doing that.”

They Aren’t Scared Of Metal Elitists

“I mean, yeah, you wouldn’t strictly call us a metal band in the traditional sense of the word, but we have come from that scene, paid our dues, and it will always be part of us – mainly because the people that come to our shows are metal fans. We don’t hide our influences, and black metal is one of our influences. The mentality of people who don’t want to acknowledge us is fine, there are bands like Deafheaven that are controversial to some fans. That’s fine, you can’t please those people. We have a very strong idea of what our identity is, we’re not going to be swayed from it.”

They Reflect The State Of The World Right Now

“The world is pretty scary at the moment, of course. I think all over the world there are disenchanted and alienated people. The music that I grew up loving came from a similar time. Killing Joke were not singing about happy things, they came from a time when things were shit, so the music was full of the sound of rage and frustration. There are some really awful bands being pushed at the moment, bands that have nothing to say about the world. I hope we can connect with the people that are looking at the world and wanting music that is an honest reflection of it.”

They Embrace The Darkness

“There is a book that is highly influential to us called In The Dust Of This Planet by a writer called Eugene Thacker. It’s about the idea that we enjoy horror movies and writing because it helps us to deal with the real horror of the world. It gives us a way to confront and enjoy these really dark ideas, and I feel we do that with our music. It is dark and it does deal with some of the most difficult and challenging aspects of life, but I think people need to do that, I think people actually enjoy confronting negativity. When people say that something is depressing, and that it means it isn’t good, I find that strange, because we all like to do that. And our music is built on that darkness.”

Doom 101: The story of Grave Pleasures